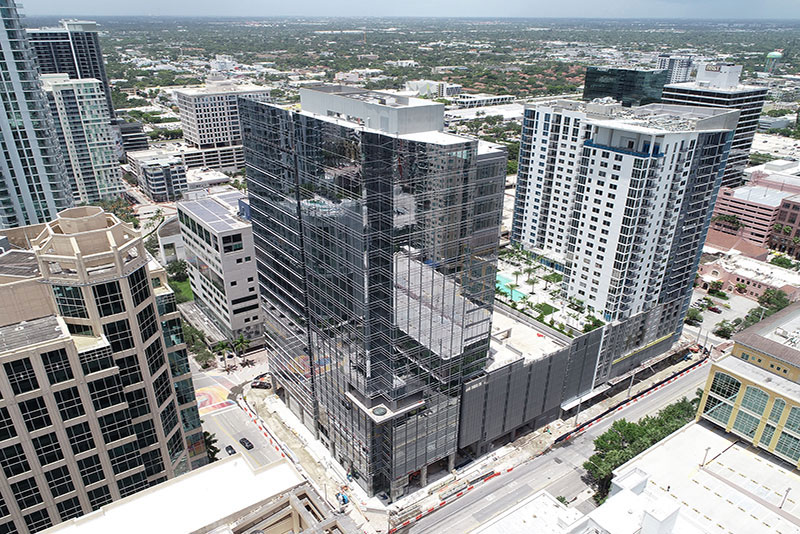 A new downtown development offers more urban living, some of the city's most modern office space — and a new grocery store.

Broadly, these were the ideas that led the Stiles Corporation to a new downtown development that could be said to be ambitious, even by their standards. The Main Las Olas, a 1.4-million-square-foot mixed-use development on East Las Olas Boulevard near SE Second Avenue, includes a 27-story tower, 341 residential units at a mixture of price points, and retail including a GreenWise Market.

The first residents began moving into Novo Las Olas, the development's residential side, in late November. As this story was being written, GreenWise was aiming for a late December opening, and Stiles was considering retail tenants for the Las Olas side of the development.

People at Stiles have been thinking about a project like this for some time — and believe that now is the right time to make it happen.

"The vision of this project started 8 to 10 years ago," Stiles CEO and board director Ken Stiles says. "We've put a lot of thought into it. We looked into the downtown market. We felt like it was the right time…for a new building to be built."

Though just one of a number of tenants, the GreenWise Market is a key part of the development. Owned by Publix, GreenWise locations tend to be smaller — like this one, often on the ground floor of buildings rather than standalone Publix supermarkets.

"With the GreenWise concept, it's not your traditional Publix," Stiles says. "It will have your regular groceries, but for a lot of it, it will be prepared foods" like a Whole Foods or a Fresh Market.

"Our relationship with Publix has been great over the years," Stiles says. "I think we've developed 41 Publixes throughout the Southeast. In the last six years, they really wanted a location around downtown."

Stiles looked around Flagler Village, but with so much multistory residential being built there, it was never going to work financially to find a spot for a standalone Publix, Stiles says. A GreenWise sounded like the better option for central Fort Lauderdale. When Publix looked at the area's demographics — the increasing number of people living downtown, within walking distance to work and entertainment — they liked what they saw.

"If we'd suggested this 10 years ago, I don't think they would have agreed," he says. "They felt they had the walkability to move forward for it."

A supermarket in the building is also a great offer for attracting tenants. "We felt that it's going to be the biggest amenity, and also the hype," Stiles says. He thinks residents will also be attracted by what goes in on the Las Olas side, although they're still looking at exactly what that is going to be.

"On the Las Olas side, we've got a lot of interest," he says. "We're just kicking around what we're going to do there — whether it's going to be more restaurant related, social, or a bank, which we've considered as well."

The apartments themselves have a number of different price points, with the least expensive coming in at less than $1,800 a month.

"This was really the (question) from the beginning — how do we build a downtown building for the resident who lives in Flagler Village? Give somebody south of Broward something with a grocery store, something walkable," Stiles says. "That's how the design really came about."

It feels different from other Stiles projects. "It's got a more edgy feeling, I would say," Stiles says. "It's a lot more exposed concrete; we've got graffiti artists going in to add art to it." That said, it's also got amenities like a pool deck and grilling/socializing spaces. Social spaces are also a big part of the development's other component, its office space.

There have been hardly any new office buildings built in downtown Fort Lauderdale in the last couple decades, Stiles notes, and when they were thinking about this one, he and several others flew around the country looking at other new office developments.

"The glass is a perfect example," he says. "We wanted a different look than we've done in the past." The only place that the non-glassy, transparent glazing system they wanted had been used was in one building in Denver, which they looked at. "That was one of the first differences we did on the aesthetic side of it."

Meanwhile the 14-foot slab for a floor meant 12-foot glass in the offices. "And it has been a wow factor when tenants have toured the space," he says.
They also took some of what they'd learned about residential developments and incorporated it into the office side. That means a residential-style lounge or amenity area, outdoor bar and firepit, patio and breakout spaces with a living room feel.

There's also a gym, showers and a bike storage system. They felt it was important for the gym to have shower facilities for those who want to cycle to work, have a jog at lunch or work out before going to work.

It's all part of an ongoing activation of the downtown portion of Las Olas. Twenty years ago, Stiles notes, the part of Las Olas that anyone not working there wanted to visit ended at the tunnel. Eventually restaurants spread out — but then Third Avenue became the kind-of cutoff. Now downtown is becoming one uninterrupted space.

"It's not just our project but all the projects there," Stiles says, "that are really activating that part of Las Olas."